My experience of the people in Havana

What is the most important thing in the world?

I’m reminded of this Maori proverb whenever I think of our stay in Havana because of the heart-warming interactions we had with so many people. The most important thing in Havana is the people, and it was the people that truely made our stay beautiful even though we were in such a culturally differing environment.

We landed in Havana, haggled with the taxi driver, and then found him such a pleasure to interact with as he helped us learn Spanish. He must’ve known about a handful of English words but we were still able to have a fun ride to our “booked” accomodation. More about that drama here. We found the neighbours so helpful and concerned for us, and the driver took it upon himself to find us a new place. But this was a typical neighbourhood, where they knew each other and had a strong community feel.

We were introduced to our hosts, Lidia who is the housekeeper and Mari who only stayed at night so I”m not sure what her role was. With our language barrier, they didn’t speak any English, I didn’t think I’d grow to cherish these ladies like I did.

We started our stay quite lost without the internet to guide us to locations and to translate for us. The owner understood our budget and introduced us to a local restaurant. This restaurant was not where the tourists eat, but served good food. We still don’t know what this place is called but it is if you’re ever in Havana, it is on San Lazaro between Hospital and Espada. On a side note, the common way to give directions is to give the intersection location. Here we met a young guy who spoke English and who we had the pleasure of building a relationship with. Julio had a natural style about him, he could get along with anyone. He also gave hubby a different Cuban dish every day which hubby loved.

We found out that Julio had a four year old daughter living with her mum in a town ten hours away from Havana. He worked every day for two months and then would get one week off to go see them. His partner had to stay with her mum because of illness so he would WhatsApp his daughter daily. This was typical of the hardship stories we heard here.

The day before his dad was going to drive him, most people don’t own a car, Julio arranged for us to visit his favourite beach in Havana. More about that here.

On our first night I needed to access the internet to get a refund from Airbnb for our failed booking. Mari walked me to one of the government sites, which is usually a park or square. She linked arms with me the whole time which felt like it was for my safety. She stayed away from other people even though I thought we’d get better reception where most people were hovering around. I still couldn’t connect so she cautiously asked around for help and hesitantly approached a person so I could buy a one hour card for 2 CUC. Then she argued with him when I couldn’t connect and in his broken English he said he would make sure it works. I could see she took responsibility of me and perhaps this was her job at our casa particular.

Once I had connected and sent my Airbnb message we strolled back and made conversation with hand motions throwing in one word here and there that we believed the person understood. She showed me photos of her granddaughter who lives in New York. She explained that she hadn’t seen her son since he was six when he escaped to America. She was not allowed a passport so couldn’t travel to see them and her son was not allowed to come back into Cuba or he would have to stay. I cried with her as I felt the sorrow in her loss.

On Sunday we decided it was too hot to bother with sight seeing and preferred to enjoy the air-conditioned room. That day, I saw Lidia preparing a big lunch which turned out to be because her son and granddaughter were visiting. I wasn’t sure if it was an every Sunday thing or just one-off. Isabela was a spark of joy who made her grandmother’s eyes shine. More about her in our Cuban Espanol post.

Lidia’s son spoke quite a bit of English and shared that his wife was at home with their four week old girl. They lived about forty minutes away. I didn’t want to pry but I wondered how much Lidia would get to visit her son, because what I saw was her working seven days a week, all day. That’s probably why he was visiting here instead of Lidia going to see her newborn granddaughter.

Lidia had a pet turtle which she kept in a bowl in the courtyard. My kids loved checking the turtle every morning. One day little 2yo was unsettled and crying so she talked to him the whole time about the turtle then picked up the turtles bowl, emptied into the sink and showed him how she washed the turtle’s shell with a toothbrush. He loved this and was a happy chappy after that.

There were a few things that accentuated her role in the house. One day the New Jersey couple who I’d been conversing with were having a coffee in the kitchen with Lidia. I decided to join them and told hubby to come too. Lidia immediately got out of her seat and said she would stand because there were not enough chairs. Hubby refused to let her stand and he sat on the stairs insisting she sit down until she finally sat down at the table. Whenever my kids made a mess I would ask her for a cloth to clean it up and she would do the cleaning, refusing to let me do it. But she was always friendly and seemed pleased to be able to help us in any way. I suppose the most obvious was that they both slept on fold out beds in the kitchen.

Lidia helped me with all the little tasks at home that I needed for my family. She would continually talk to me in Spanish knowing I didn’t understand the words but by the way she spoke I did understand the jist of what she was saying.

When we were out and about eating where the locals eat, the people serving us were really accomodating. Not many tourists ate where the locals ate so the exploration of these places was exciting. We became familiar with the style of interaction the locals had for us as opposed to each other. We didn’t spend much time where there were a lot of tourists and perhaps that’s what created tantalised our senses more.

Interestingly when we found a very cheap “American” style restaurant to regularly eat at, we felt disconnected from the charm of the local people. We were now officially tourists. A separate entity to the locals. No longer living with them. Instead now watching them. In hindsight, hubby and I felt that we enjoyed the vibe when we were eating as locals, able to connect with those that served us, far more than the  short term pleasure of eating familiar food at a tourist joint, where our wait staff were aloof, treating us as “just another customer”.

Overall, the real treat was being able to sit in our casa particular, on the beautiful antique furniture, in the front room with it’s high ornate ceilings, keeping the front door wide open so that I could look out at the happenings on the street as the neighbourhood carried on with their daily life. 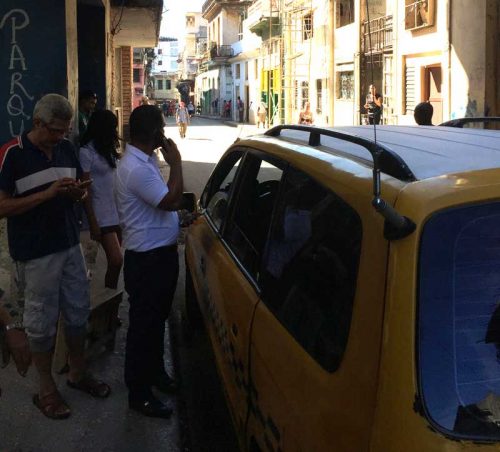