It’s not often that we split into two groups but for this activity it was necessary: Lui would not be allowed to go on a one kilometre flying fox.

I didn’t go to the 100% Aventura Canopy Tour but Ajay and the teens did. Although you could go if you are four years old and up, I was confident Kenzo wouldn’t want to be part of 18 different flying foxes over a misty rainforest. From the few videos I saw, it looked amazing and awesome for those that love a flying fox. 100% Aventura have the longest one in Central America plus a massive drop where they pushed my son off a 500ft ledge once he was safely harnessed in. There was no polite “are you ready?”. The drop was optional. You free fall for 140 metres before you feel the snag of the harness.

We chose 100% Aventura for the flying foxes, even though there are other companies, because our host recommended them to us. I wanted to walk through the cloud forest while Ajay and the teens went on the canopy tour. Aventura offered both and they would finish around the same time, so I took our under five’s.

I figured that if the little two became tired and we couldn’t keep up with the group then I would lose the group and carry-on with Kenzo and Lui at our own pace. I needn’t have worried because only one other person joined us, a very sweet marine biologist who enjoyed writing notes and drawing pictures of the birds we saw. Because the group was so small the guide was happy to wait for us as Lui toddled along or Kenzo stopped to check out a millipede.

I love going on tours because they’re so informative, especially when the ratio of tour guide to tourists is so high, like it was today. I got to ask all my dumb questions like what is primary forest versus secondary. Both the marine biologist and the tour guide knew. Primary forest is where there is no indication of human interference. Secondary forest is where the forest is regenerating and recovering after human interference. The walk we went on was primarily secondary forest because it used to be farms owned by four families. Over thirty years ago they realised ecotourism would reap greater profits so they stopped farming and allowed the forest to grow back. It took about 20 years for it to regenerate but it was thriving.

Because the forest is so dense we mainly focused on the flora. We were fortunate enough not to be in a cloud that day so the path was dry and there was no fog, making it easier to spot the few birds that were visible. One of the special birds we saw was the quetzal. It is endangered due to deforestation. Wherever we travel in the world, as soon as we begin researching any creature, we realise how we as humans are killing off fauna by destroying their natural habitats or feeding them human foods such as bread. Even the pesky seagull has reduced in population by 80% in NZ in the last 30 years.

I digress. We were fortunate to see two quetzals: one in the trees over a hundred metres away using binoculars and the other was below us as we crossed one of the bridges. It was feeding on one of the fruit trees that’s much like an avocado but not edible for humans. The tour guide was easily able to spot it because of it’s distinct call.

We also saw a three-toed sloth. These sloths are different to the two-toed sloths that live at sea level. The three-toed sloth is used to high altitudes (we were over 2000 metres above sea level) where it can become dangerously gusty, or damp and cold due to the clouds that shroud the forests. These sloths have a natural thermostat that allows them to regulate their internal temperatures.

There were trees that had natural ladders formed inside or outside their trunks due to vines that had climbed up them and killed the tree creating a hollow inside. There were also plants that lived on the trees but did not use them for any nutrients. The height was a vantage point to capture whatever food and water the wind brought them. There were also plants that stored water after rain, allowing animals access to fresh water without having to come down to the dangerous forest floor where jungle cats could be waiting to eat them.

The bouncing of the suspension bridges were a lot of fun for Kenzo and Lui, until they weren’t! The tour started at 8am but both were ready for a nap by 9am. I dragged them along the last couple of bridges until 9:30am by which time both were asleep and I was carrying both back up the hill towards the reception. Both the tour guide and the marine biologist tried to take a child but Kenzo and Lui were not having a bar of it. I definitely got my workout that day and my biceps and thighs were in pain the next day. 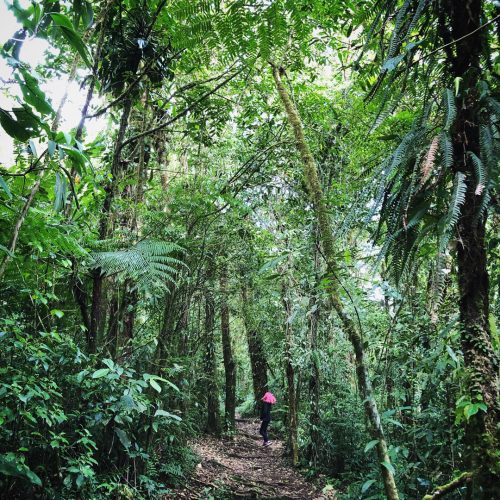 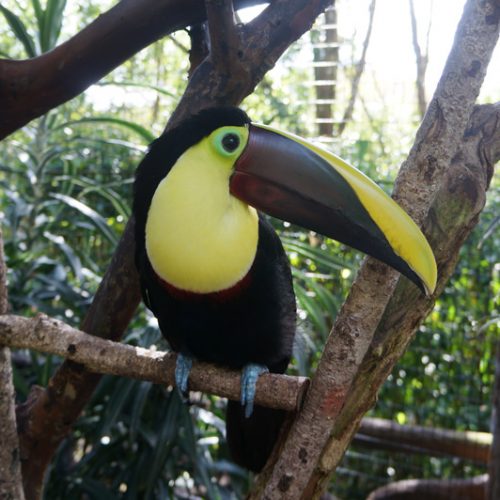