My knowledge of, Budapest or Hungary for that matter, hadn’t featured on my radar. At worst, in primary school, we cracked jokes about wanting food because we were “Hungary”. Yes, we thought it was lol at the time. We did try to crack the same jokes with our four year old. It just didn’t seem that funny anymore. I did know Hungary is in Europe. Well… prepare for some interesting history about Hungary including why it was critical for empire building, who the Magyars are, and one of its infamous characters Count Dracula.

But first let’s start with something light. Budapest is a feast for the eyes. Some have referred to it as the “Paris of the east” or the “most beautiful city in Europe”. That’s probably because building after building is adorned with carvings and sculptures. Pest’s centre hasn’t been over run by the practical ugliness that can kill a city’s charm, or the glass office buildings, deemed beautiful in modern cities that are actually becoming more and more bland.

This surprises many people because Hungary was a communist country at one point, so typically there are Stalinist type buildings which are flat panels that have no character, decor, charm or colour – essentially ugly buildings. But throughout the centre of Budapest the buildings are ornate, charming or beautiful. In spite of many, many wars destroying so many beautiful and often historical buildings, in both Obuda and Pest, there are still blocks and blocks of buildings to gaze up at and admire.

Hungarians like to see their origins as being a mixture of the Huns that invaded mid 400CE led by Attila the Great and Magyar people, who came from Russia/Asia origins. Several Magyar tribes arrived in Hungary and settled after 800CE. They colonised the region of Hungary and formed seven main tribes. They were considered fishermen tribes. This building was built in honour of the seven tribes that founded the country and fought off neighbouring invaders during the medieval period. There are seven small towers on top of this building that symbolise the seven tribes. This building was built in the 1800’s and for lack of better adjectives, it’s beautiful.

These Magyar tribes destroyed a German kingdom at the time called Bavaria, laying Western Europe open for fast and devastating raids. They also raided south of them, in what is now Croatia and Serbia. It wasn’t until 1001CE when a Hungarian ruler emerged named Stephen. He became Christian, crowned himself King of Hungary and committed his whole kingdom to Christianity. The Pope then sealed the approval of the kingdom, thus ending the raids on Europe.

Budapest’s location is significant. When Asian or Middle Eastern kingdoms wanted to invade Europe, they had to pass through Istanbul, travel on to Belgrade in Serbia which is on the Danube river and then head up the Danube river to Obuda where they could cross over to Pest and enter into Western Europe. It also meant that now Budapest would be the gateway to raiding the Christian world. King Stephen became St Stephen. And Hungary spent many centuries protecting Western Europe from Islamic attacks.

The St Stephen’s Basilica was built in the 1800’s to commemorate St Steven.

After the Mongolian invasion in the 1200’s, people moved higher up the banks of the river onto Castle Hill. They built a wall to protect themselves and later a castle was built. There were frequent invasions, successful and failed throughout medieval history. The last Islamic invasion was by the Ottoman Turks in the 1500’s.

During the Turk reign, many Turkish buildings were built and some of the baths are still in tact. After the final Ottoman invasion the city was in ruins.

In 1476 King Matthias Corvinus of Hungary married Beatrix of Naples in 1476.  With the new Queen came, many architects and stone masons from Italy so Hungary is one of the first places in Europe that was influenced by the renaissance period. The city was rebuilt with many amazing buildings, only to be completely bombed in World War II.

The streets today still follow medieval design but the buildings vary. It is still a residential area and many of the homes have a sign indicating when the building was built.

Buda Castle looks very impressive on the outside but once Stalin had his hands on it, he stripped it of anything and everything leaving only stone walls and dust. The outside has been maintained recently with beautiful gardens. Underneath the castle, while building secret tunnels and wine cellars, a labyrinth of volcanic caves were discovered running under Castle Hill.

We went down the stairs to enter the labyrinth. It was dark, cold and eery. We decided it was too spooky for the little ones and left. Turns out the earliest traces of life in this area are human remains over 500,000 years old, found in the tunnels. The tunnels were used for some horrible things including a dungeon and torture chamber. A harem also existed here in the Ottoman reign of the 1400 and 1500’s. It is believed that the women were thrown down a well when they were not needed or bricked up behind a wall when they were no longer wanted, hence the female bones that have been found in the tunnels.

Probably the most famous character associated with these tunnels is Vlad Tepes, also known as Count Dracula. Vlad’s role was Voivod of Havasalföld, meaning he was King of Romania and part of the border that defended Western Europe from Islamic invasions. King Mathhias, his ally, turned against him and imprisoned him in Buda Castle. There are no records of how he was tortured or for how long, but after he was released, he became the horror story of Europe. Vlad was originally born in Hungary but was one of the heirs to a kingdom in Transylvania.

Although he was raised Roman Catholic, and loyal to Western European countries, he was held hostage by the Ottoman Turks for many years and eventually, and became an ally of the Islamic Turks. The Turks helped him to reclaim his thrown. Later the Turks betrayed him, when he became too powerful, by allying with Catholic King Matthais. Vlad was thrown in the Buda Castle dungeons, in the the dankest, darkest part of the tunnels. Many years later when he came out he was neither defender of the Catholic faith nor defender of the Islamic Turks. He fought for his own country and now is a Romanian hero.

The central part of this church was built around 1400CE. During the Turkish rule the church was converted to a mosque. Once Christians ruled again, the mosque was converted back to a church. It fell to ruin and in the 1600’s was renovated in Baroque style. Baroque was fashionable at the time because it was the Catholic church’s way of separating itself from Protestant churches which were much simpler and very plain. Baroque is artistic, intricate and ornate. What I liked most about this church is it’s colourful roof.

The first permanent bridge of Budapest was built because a forward thinker and great politician of Hungary Count István Széchenyi, got stuck on one side of the river and had to wait a week to get to his father’s funeral. It was winter of 1820 and the river had frozen over so he crossed it but then couldn’t return when he heard news that his father had died. Count Széchenyi organised an English engineer to design the bridge in 1820. When it was completed in 1849, it was considered to be one of the wonders of the modern world. The lions on the end of the bridge were useful to appease Lui when he was hot and bothered on the bus.

This is the third largest parliament building in the world and was our favourite building in Budapest. We went to view it during the day and at night when it’s completely lit up. It is a stunning sight.

It is built in neo-Gothic style. It contains all the curves and intricacies of gothic architecture (from the Middle Ages). Think Notre Dame Cathedral in Paris with gargoyles and point sharp bits sticking out everywhere. But neo-gothic was only used in the 1800 and 1900’s.

This building is the exact same height as St Stephen’s basilica and no building in the city is allowed to be taller than that. It’s symbolic heights represented the equality of power between religion and the government in Hungary.

A pensive statue sits on the stairs facing the river. I think it’s the best statue I’ve seen in all of Europe, both it’s poise and placement.

The Painful Past of Nationalism

Unfortunately for both World Wars, Hungary was an ally of Germany. In World War II the prime minister persecuted Jews, killing over 400,000. In Budapest Jews had a 50% chance of survival, those in the countryside had a 10% chance. Along the Danube river are a tribute of shoes, for those that were forced to take their shoes off and then were shot so that their bodies floated down the river.

In Szabadsag Square is a monument depicting Nazi Germany’s symbolic eagle being to blame for the Hungary’s tragic past. The outcry of locals is in the shrine built in front of the monument explaining how wrong this monument is and how it was erected without city consent. People are still lobbying to have it removed.

In front of it is a fun, family friendly fountain which lightens the tragedy of blame that the monument symbolises. It’s sensored, so when you step towards the water, the wall of water stops so you can cross into the middle of the fountain. We all had a blast playing with this. The monument is symbolic of what many nations choose to do: ignore their faults and blame others for the tragedies and persecutions created because of nationalism. Nationalism is a disease that spreads readily to it’s neighbours – I’m paraphrasing from the book Homosapiens. The point is, accepting each person’s individuality and each culture’s uniqueness will help us all to get along better.

Budapest has been an amazing place to check out. I’m glad Ajay pushed for it because I had no idea what awaited us.

Our Glimpse of Budapest Family Time In The Budapest Baths 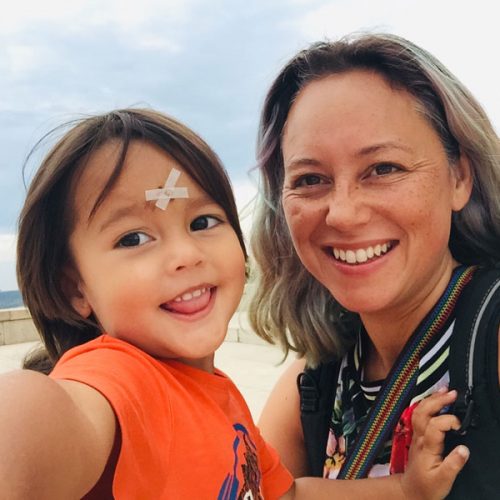