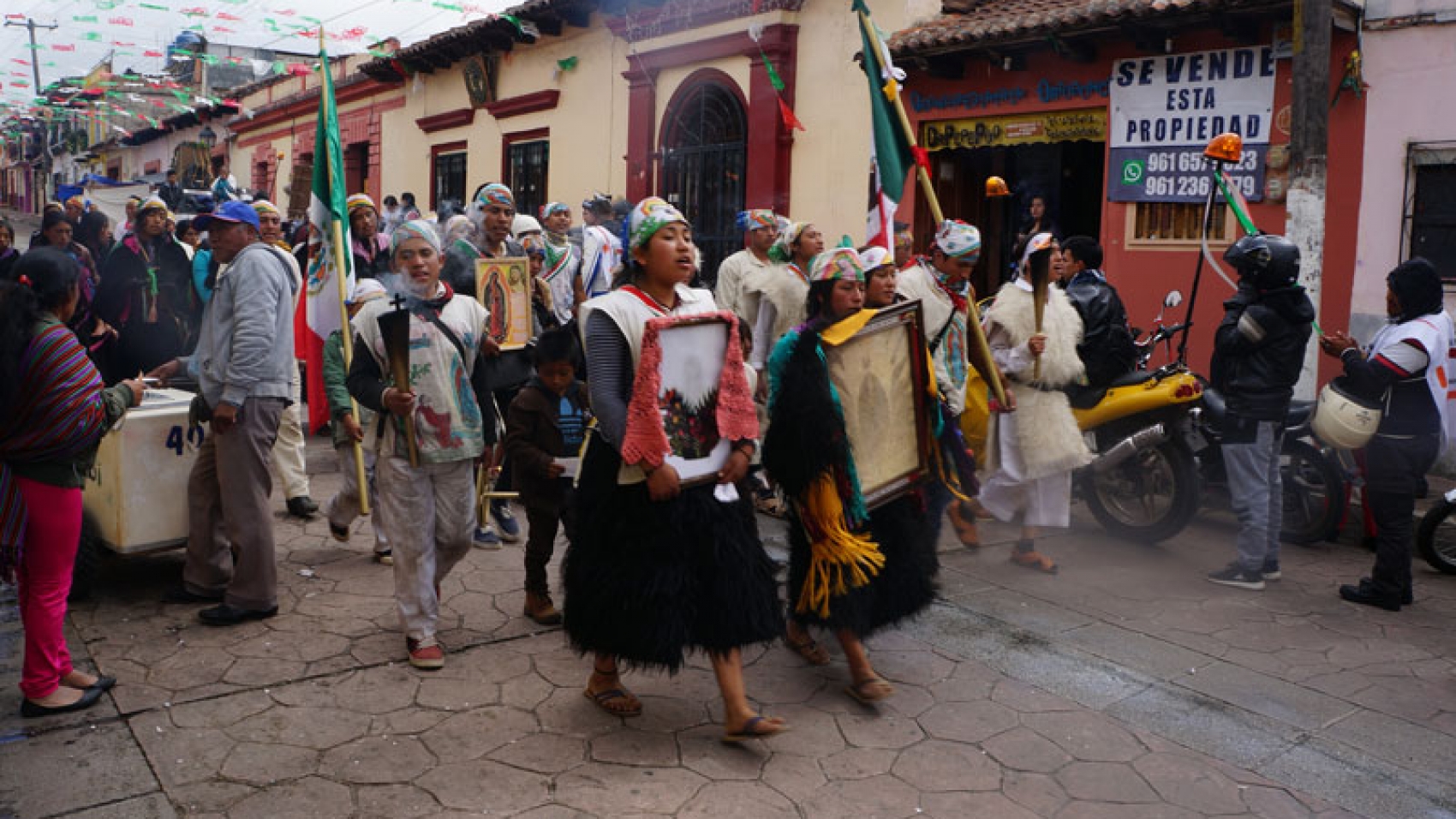 The Feast Day of Our Lady of Guadalupe December 12th

In Mexico the patron saint is Our Lady of Guadalupe. Her feast day is December 12th and locals say it is the biggest celebration in Mexico, bigger than Christmas. We began seeing this festival in Isla Mujeres. As Catholics do nine day novenas, many of the faithful Guadalupe would have started on the 3rd of December so that it would finish on the 11th in time for the festivals at 11pm mass to celebrate the feast day of Our Lady of Guadalupe.

In San Cristobal De Las Casas in Chiapas there is a church in honour of Our Lady of Guadalupe. Pilgrims from all over Mexico will travel in organised groups to Mexico City to the official shrine where San Juan saw the apparition of Mother Mary over 500 years ago. For those that are unable to reach Tepeyac will pilgrim to Iglesia de Guadalupe (Church of Guadalupe) instead. This pilgrimage aims to reach the church and return back to their home town parish by 11th December in time for the 11pm mass and festivities.

When we arrived in Chiapas on December 9th, we took a taxi from the Tuxtla airport at sea level to San Cristobal DLC which is over 2000 metres above sea level. The temperature changes from warm tropical climates to cooler mountain jungle climates. As we travelled we kept passing a truck or a ute that would carry at least ten people in the back. The front would be decorated with flowers and have a picture of Our Lady of Guadalupe. Behind or in front of that truck would be a runner carrying a burning torch. We asked our driver about this but he spoke no English so we struggled to understand his explanation. Basically we understood it was a pilgrimage.

As we wandered the colonial streets of San Cristobal on December 10th we saw many of the pilgrimage groups arriving and leaving the city. We decided to follow them since they were heading in a particular direction, chanting or singing or praying. As we reached Real de Guadalupe which is the street from the centre of town that leads up to Iglesia de Guadalupe, we saw the groups were all walking, often lead by musicians who played cheerful music while one person would cry out a phrase and the rest would shout a response. Some groups handed out sweets to the children who watched. We kept hearing fireworks day and night as each group reached and then would celebrate with loud explosions that produce no light display but are simply to accentuate the loudness of their prayers/thankgivings.

Many of them looked exhausted and worn but their spirit was so alive. It was a humbling experience to watch these people who had taken on an arduous journey, having travelled day and night, keeping their torch alight, and keeping their faith alive. They came with prayers for the future or for thanksgiving of prayers having been fulfilled. Some mothers carried babies in their slings. Some groups had small children with them. Many of the groups had a team outfit which usually was a white t-shirt with a picture of Our Lady of Guadalupe, but some had matching track suits.

At the base of the church entry were rides for a fair including a Ferris wheel and go-karts. As we walked up the 79 stairs to the church, there were food and toy stalls and we could hear all sorts of festive music playing. Outside the church was a live band playing traditional music and some people got the urge to dance along to it. We could see some of the torches of groups outside the church still alight.

Inside, the groups that had finally reached were on their knees walking up to the altar while singing or praying. There was a beautiful shrine to Mother Mary above the sacristy and to the left a beautifully decorated scene of San Juan receiving the roses from Our Lady of Guadalupe. It was lovely to see Jesus in a locally made bright orange cloth as he hung on the cross.

When each group finished they would then move out the front of the church to the right. I’m not sure how many of them would walk back to their village or home town versus catch a ride but a change washed over their posture and face. Many of them were in celebratory mode after they had finished. You could see the joy on their faces like they were now in party mode.

Fireworks on the Eve of the Feast Day

One of the locals tipped us off that on December 11th at 12pm there would be fireworks going all the way up the street to Iglesia de Guadalupe, the part that becomes pedestrians only during this festival. We decided to be in a cafe at that time so we could comfortably wait for it to start but also hide from the noise if needed.

At 11:30am we saw a group including young children, helping to lay a row of gunpowder down and then place small “bombs” about a metre apart. This was exciting because I’d never seen gun powder lit except in movies.

We were enjoying our hot chocolate, brewed with local cocoa from Chiapas when we heard the first BOOM go off at 12pm. We went outside to have a look.

From a block away we could see the fire of the gun powder and hear a “Boom” every few seconds. There was huge puffs of smoke after each bang. “That’s not too loud” I said. A group of people were walking ahead of it to ensure it continued to burn. Another group were walking ahead of it for the excitement of the noise. The little ones wanted to go hide inside and I wanted to be outside watching the little fireworks combust into a ball of fire and then create thick smoke.

By the time the gunpowder was a hundred meters down the road we were all hiding in the cafe with the doors closed because it was so loud. The ground shook and we were covering our ears but still hearing thundering BANGs in our head.

After I thought it had passed I opened the door and peeked outside. It was about 100 metres up the road. BANG! It made me jump. BANG! The noise was defeating but thrilling. BANG! I had to go back inside. BANG! It was way too loud still.

Though the experience was exciting and I loved it, it also was scary if I thought about that type of noise in a war zone – after all, they were using gun powder to create each explosion.

Anyway, we all left happier for having made the effort to come back to this side of town for fireworks.