We visited the ruins twice, once using the tour which took us from San Cristobal De Las Casas to Palenque and then I forced everyone out of bed early the next morning to view it before all the tour buses arrived.

For kids, the Palenque ruins probably doesn’t sound exciting – a bunch of old rocks piled high on a hill “woohoo”. But every child finds something to keep themselves entertained. Ajay and I observed their excitement levels elevate at different times based on their personalities:

– Carmelo loves the excitement of challenging his speed up the steep steps or agility heading down them, sometimes while balancing a little brother in one arm.

– Lui loved the freedom to walk around the expansive grassy areas.

– Kenzo kept a keen ear for any sounds of monkeys. We were all hopeful that we would see one of the howler monkeys that live around the Palenque jungle.

– Giselle enjoyed the shady areas to sit down and rest.

But here’s some of their highlights of this trip:

Giselle and Carmelo were interested in the ruins and the history and they enjoyed trying to run through the low ceiling tunnels of the palace and jumping out of cubby holes where they might be able to jump-scare their sibling. They also enjoyed the freedom to explore the tops of these very tall temple structures without the safety nets they are familiar with in New Zealand. The steps are so steep that the tourism board in NZ would’ve enforced guard rails everywhere. Here in Palenque, however, the only limits are if there are any pictures, designs or hieroglyphics. These are blocked off and protected from being touched and from rain or sun, although you can still view it. Everywhere else is free for exploration which includes potential to tumble down some major drops.

One of the resting spots, under a big shady tree with little seats of rock to sit on, was where Ajay and I left the kids so that we could take one final selfie at the top of the palace. When we came back Lui and Kenzo had been playing in the gravel like it was a sandpit. I found lots of little stones at Lui’s next nappy change in his nappy, t-shirt and shorts.

All our kids were fascinated with the ant hills of the giant ants where leaves were being taken down for food and a queen ant was being moved. Carmelo and Giselle loved taking interesting photos of the lizards we saw hiding in the cracks of rocks on the pyramids. Kenzo and Lui were fascinated once again when we saw butterflies. They looked like flowers on the grass so it was always a pleasant surprise when you walk through the grass accidentally disturbing them. They would fly very low and very close to their home base unlike other butterflies that would be scared away. You can see photos of the ants, butterflies and lizards in the section Wildlife in Chiapas.

The palace is one of the main buildings built by a ruler of the name Palak. There are images of his coronation as an adult. He inherited the throne at the age of 12 and had his mother ruling until he was old enough to take over. One image shows his mum holding the crown over his head.

The Temple of Inscriptions is closed but is the most fascinating. Apparently inside there are three slabs of hyroglyphics that have the most detailed descriptions of Mayan history throughout Central America. Once upon a time there were scripts but the Spanish destroyed any Mayan books that they found when they arrived in the 1500’s, so these stone slabs are invaluable in piecing together Mayan history.

Meandering through the city is a stream which was the fresh water source. A canal was built to allow water to flow closer to the palace for easier access and bridges were built over the canal.

Residential Area of the Commoners

The main areas of interest are the palace and religious areas but at Palenque, the archeologists also took time to excavate some homes of the working class folk. Many of the residential areas are still covered with jungle. It’s estimated that 90% of the site has not been excavated. I went off track about ten metres and it was easy to see why the rest of the area was not excavated. The jungle is dense and the ruins most likely are not intact since roots of trees or mud have probably deteriorated most of it. What had been excavated gave them enough clues to piece together the puzzle of how the city managed to thrive. Apparently, this area was one of the last parts of the city to be built. 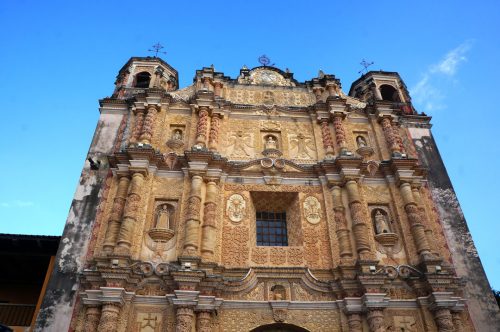