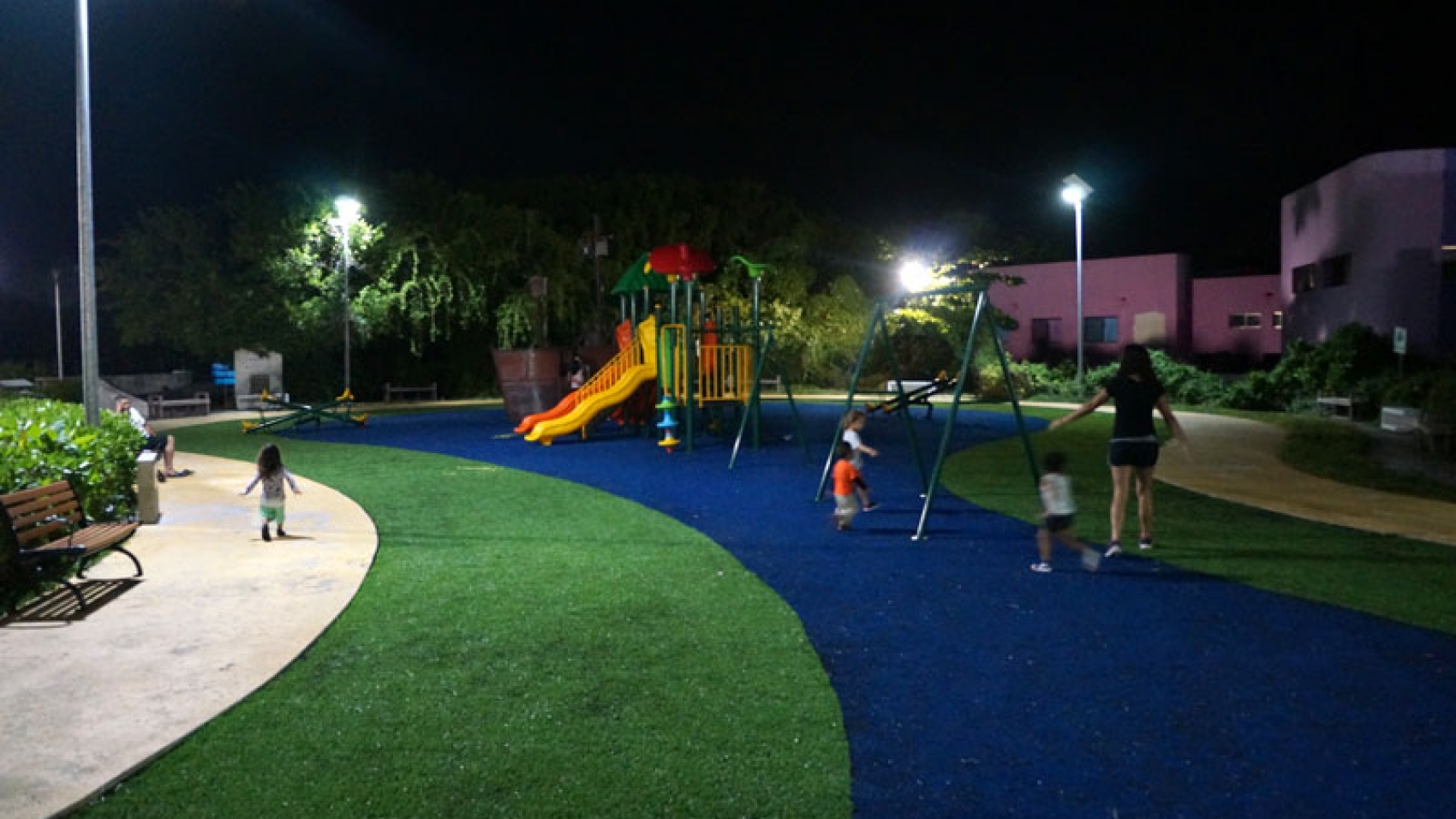 Islas Mujeres has great playgrounds and quite modern.

Where we stayed near La Gloria was a new facility that had an outdoor stage, two soccer courts and a playground. We enjoyed going here when it was cool enough so that we could stretch our legs and play. The playground we visited almost daily had slides and see-saws and two pirate ships. It had slides for two days but the quality of materials being used on the playgrounds means that they do not last long.

One of the great things about this area was that cleaners were in every morning cleaning up rubbish. That was important because a lot of people used the playground in the evenings and late at night so the bins would get full and then people would start dumping rubbish anywhere, in spite of all the “No tirar busar” signs.

There was one playground that was locked until after school hours and then it stayed open til well after 9pm. The locked one had toilets and sold snacks. We had to sign in every time we visited, which was often because it was opposite the laundromat I used.

One of the outdoor soccer courts was covered which was great when it rained, or more importantly in the heat of the day, for us to play or exercise (although we probably could’ve done more of the exercise part 😉

On Thursday nights there was a soccer league in the uncovered soccer court which was a bit like indoor soccer rules because they were allowed to kick the ball off the side walls.

After school there were often kids hanging out here or playing soccer, it was definitely the most common sport we saw on the island.

Because we spent a month on Isla we had a lot of downtime at home while the older two were studying. Being in such a tiny place we didn’t have much space to spread out so we had to be creative about how we entertained our little two. We also had the problem of using up a lot of plastic water bottles and having no recycling on the island. So most or our home play involved construction with blocks and designing vehicles with water bottles. I also called on my Playcentre forum to help with ideas. Heres what we came up with.

Waterfalls down the stairs where each bottle catches water from the step above. My daughter in her brilliance put a lid on the bottom bottle (not something I usually do when I have the hose constantly running) so the young ones learnt to take the bottle from the bottom step and carry it to the top to refill the waterfall. This saved me having to go back and forth from the kitchen tap for refills.

We tried drumming on the bottles, sometimes with water in bottles and mostly without. It was pretty noisey so we didn’t encourage this one much 😉

We made buckets out of the base of the bottles and used them in the shower. They often got into the shampoo bottle to make bubbles.

They requested lots of vehicles including submarines, air craft carriers, car ferries, planes and trucks. They also used my daughter’s creations as a light house and an air traffic control tower.

Although we did beach trips, they were not frequent because we enjoyed our at home time. To keep ourselves moving about after being stuck in a tiny home, we would spend a morning or evening walking around the neighbourhood. We were close to the laguna (lake) which was shady from the mangrove trees and we could bird or lizard watch. Check out our wildlife post for more images.

We also would do coastal walks and found a tiny nook of a beach on the east coast facing the Caribbean Sea where we could play on the sand with shells and rocks while having the whole beach totally to ourselves. The entrance is somewhere close to Isla Contoy and Calle Lizeta on the waterfront. I had so much time I checked out each little pathway to find a way down to the water.

Having said that, any of those pathways will take you to a rock where you can sit and enjoy the sunrise, at least until the little one gets restless and you have to start walking again 🙂

Our Glimpse of Playtime Around The World

Choosing toys for a Sabbatical