I think we all mentally prepared ourselves for what Disney World would be. We’d done Disneyland Paris three times before so we expected the same. For the most part that’s what we got with a couple of additions.

Basically Disney World was awesome! We made sure we went on all the big rides, cos I’m a thrill seeker, as well as all the little rides for 2yo and 4yo to enjoy.

Apparently you can book your fast pass 30 days in advance. We didn’t realise that so we only booked it the night before. Fast Pass allows you to skip the massive queue for a ride. You are entitled to three per day. We had the free shuttle from the hotel leaving at 8am so I had to get everyone up, eating and showered at 7am. The gates opened at 9am that day. We were all still so jet lagged but too excited to miss the alarm.

The first surprise was how huge the carpark is. Unlike Paris where most people use the train line that goes directly to it, this Disney World had shuttles to get people from their carpark to the ticketing booth – an indication that many people drive here.

The shuttle bus was packed and dropped us off at 8:30am. We picked up our swipe cards from the ticketing booth. A super quick process at that time of the day.

But that wasn’t the actual park entrance. We had the option of taking the mono rail, a ferry across the lake or a bus shuttle to the Disney World park. That’s how huge this place was!!

Everything was super well organised with loads of helpful staff everywhere directing you to where head to next.

We were there before the 9am grand grand opening with Mickey Mouse at the Cinderella castle so we eagerly planned our first rides.

Mickey, Minnie, Daisy & Donald came out with so many princesses (didn’t realise there were so many!) and officially opened the park for the day.

Then the mass dispersion to be first in line for our favourite rides. For us we were keen to show the two little ones what Disney is about. So we went to mine and hubby’s favourite which is the boat ride in It’s a Small World After All. I love that ride! All the different ethnicities Disney style. As we walked through Cinderella’s castle we noticed beautiful murals of the story on the walls. I didn’t remember this in the Paris one. But the Paris one does have a cool dragon under the castle.

Our Fast Pass was for our second favourite which is the Buzz Light Year ride. It’s an interactive ride where we have a laser gun to shoot Zorg’s batteries and baddies. Plus you get to spin your car around to get accurate aim.

Space Mountain was super cool and for that we used Parent Swap. Hubby waited with the little ones while I took the older two. Then I waited with the kids. That was when we realised our older two could ride with both of us. So they experienced the thrilling rides twice while only experiencing the massive queue once.

Another difference between Paris and Orlando is that the Paris Fastpass is simply a shorter queue where you reconnect with the main queue. In Orlando the Fastpass is a seperate queue to a seperate track for the ride. Again, a reflection of how huge Disney World is compared to Disneyland Paris.

Things we were grateful for was that there were plenty of water fountains, plenty of shaded areas and even shaded play areas for kids to play while parents did Parent Swap on rides. And there was a water park for kids to cool off from the burning heat.

One thing I was proud of was that we packed so many snacks we didn’t buy food until dinner time. Even though we were staying in a hotel we managed to make sandwiches for the day and we ate cereal for breakfast.

The day got busier and by lunch time the place was packed. I had hoped it would quieten by 5pm but it seemed to get busier. By 7pm we were wondering if we should wait for the fireworks and we did. As usual Disney doesn’t disappoint. I’m not sure if there pyrotechnics are more advanced but the display was amazing and blended so well with snippets of Disney movies.

We left after that completely exhausted but super happy.

Disney Hollywood Studios was up next!

Our Glimpse of Orlando 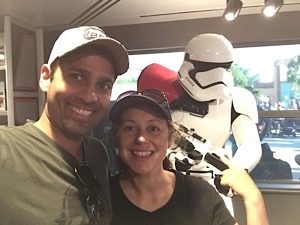