We did not expect to learn Spanish so rapidly from just a few days in La Habana. Very few people spoke even a little Inglés (English) so we found ourselves learning a language through immersion rather than through any app or book. We fumbled our way at sprinting pace inspite of no wifi.

When we arrived it was clear that none of the workers at the airport spoke English and this set the precedent for the rest of our Cuban holiday. 14yo told me to take photos of signs which were bilingual at the airport. That was great advise! Later on I was able to ask for toilets, currency exchange, a bag and shops.

To make conversation on the drive from the airport, I asked our driver how to say a few things and recorded it. His English was as bad as my Spanish so we used hand motion and my 14yo’s year 10 español to communicate. We managed to record on my phone “hows the weather?”, “it’s cold”, “it’s sunny”, “what’s your name?” And “my name is…”

The Cuban accent seems very different to what 14yo was using and his teacher had said he had great pronunciation. I’m assuming we’ll have to change our accent in Mexico too.

The first thing we needed was food so the owner of our casa particular had walked hubby to a local restaurant that was “poquito, poquito”. This was the word I’d learnt from her when I’d been asking her to reduce the price. I assumed it meant “cheap” I still don’t know what it means because google translate says it refers to “a little man” lol. And I still keep using it!

Everywhere we went we learnt the Spanish name for items we needed huevo (eggs), pampid (nappies), sin carne (without meat), etc. We also learnt that a tortilla is not a flat bread but flat food so you can order “una huevo tortilla sin sal” which is scrambled eggs flattened like a pancake without salt.

If people were friendly we asked “Commo es dis” which is “how do you say..” and then point to the item. If they spoke a little English we would ask for sentence structures like “cuanto es…” “how much…”. We played with the housekeeper’s two year old granddaughter. She loved soccer and together with our two little ones they kicked about the mini basketball. We learnt words as her dad told Isabela what we were telling our 2yo. “Pass the ball”, “Their turn”, “Well done”. We also learnt “choko” which was a way of saying hi-five that only her kindy used. If you want to learn a language immersion is definitely the fastest way. Having said that, we could’ve toured Cuba not learning any Spanish but surviving on other people’s broken English. We put ourselves out there and asked a lot and practiced pronunciations over and over. It helped to have a translation app for times when we couldn’t communicate plus we had our 14yo and 12yo’s little spanish for proper pronunciation. Probably the most important words to learn are: por favor- please, perdon- sorry, gracias- thank you, permiso- excuse me. In any language those words will take you a long way. When we reach Mexico I’ll be practicing counting, colours, directions, greetings and farewells and shopping. I found these to be the topics I functionally needed most. I would’ve loved to ask more political and religious questions but that’s probably when I’m at an advanced level. 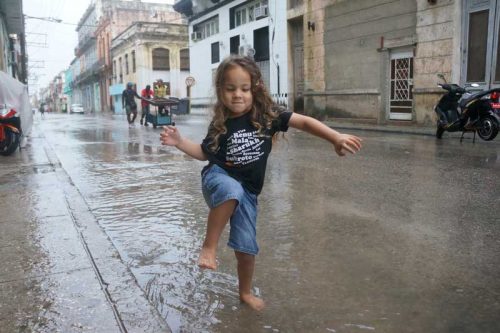