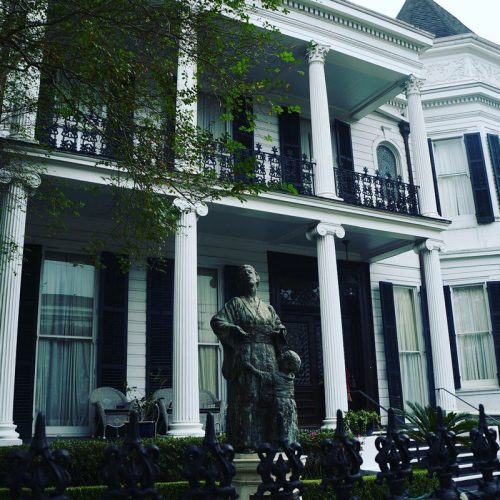 This area was the original town of New Orleans. It was settled by the French and named in honour of the Duke of Orleans. The street names are also named after their family including Bourbon St named after the House of Bourbon. This area predominantly had French speaking immigrants including French refugees from what is now known as Canada, Haitia and Sainte Domingue. Many of the French colony refugees included free people of colour who also lived in this area. Usually when immigrants came to New Orleans they settled in the French Quarter. This made for a very diverse racial population.

There were French-African-Whites or Spanish-African-Whites called Creoles who considered themselves urbane. They were sophisticated and some of the wealthier sons were sent to France to finish their education while daughters were sent to local convents. Creoles are not to be confused with Cajuns. Cajuns were considered white French country bumpkin type people who were refugees from the Canada region. Creoles also should not be confused with the American slaves or descendants of slaves who were poor and generally uneducated, they lived in a different part of town.

New Orleans allowed far more freedom for Creoles and people of colour, although they were still classed lower than lower class whites. Creoles had access to good education and were allowed to accumulate wealth. Along with the wealthy whites they loved cafes, masked balls and orchestral music. There were doctors, lawyers, teachers and business owners. Apparently in the 1850’s 85% were educated.

This influenced the architecture in this area and many of the buildings are known as Creole townhouses. Many of the homes have a Spanish or French influence with cast-iron balconies and the top level is often half a level for children’s bedrooms while the bottom floor was a shop.

It was in the 1800’s when the white American immigrants settled in the French Quarter that the racial mix began to change. The whites did not like the freedom given to the Creoles and other people of colour. They began putting laws in place that divided the city and isolated whites from anyone else. It severely impacted the education and living standards of all people of colour who were sent to live amongst the American blacks. However, the blend also created Jazz and Blues music.

The Mid-City area where we stayed had a blend of Creole cottages and American style cottages. Although many of them were two-storey homes, usually they were duplexes or the upstairs was a separate home to the downstairs.

The Garden District was originally a separate city called Lafayette. It was English speaking and home to wealthy Americans. It had a variety of different styles based on the tastes of the owner.