Everyone asks “Why Antelope Canyon?” So perhaps I’ll start there. And then I’ll get into what it was like to view this stunning place (or 15% of it) with my fanau including a tired 2yo. Plus my opinion on our tour.

So, here’s the why. There was a time when I was subject to watching a lot of Lightening McQueen ie the Cars movie. I often looked at the background and wondered what the inspiration was, surely it was based on some place. Sure enough it was based on the old Route 66 and, as I tend to do, which is follow my research down a rabbit hole, I ended up finding Horseshoe Bend and Antelope Canyon. I put them on my bucket list of just sees.

Years later as we were deciding on where to go on our sabbatical, I thought we might as well swing by this place since we were heading to New Orleans and I didn’t think I would be heading to America again after that.

And so, was it worth the journey? Very much so!

It was our first destination and although we tried to break up the journey inside of a tight timeframe it still ended up jam packed.

To find out how to get there, check out this post.

The only way to see Antelope Canyon is using a tour guide. Much like the Fox and Franz Joseph glaciers, tragic deaths in the canyon caused by natural disasters had created these new rules.

From above the ground Antelope Canyon looks like a crack in the ground that you could jump over and never know what hides below. Or you might shatter the ground beneath you because it was a thin shelf and find yourself falling four metres into the canyon.

An amazing fact is that rain from up to 100 miles away can create flash floods that drain into Antelope Canyon. Once the water reaches the canyon it can be full in minutes.

First the water fills the top of the canyon hitting the sides creating a whirlpool. Once that top is full, it travels as a wall of water filling the remainder of the canyon.

The walls of the canyon are steep and it would be difficult to climb out of quickly. Currently there are steep stairs and ladders to help you in and out.

It was an incident about ten years ago causing some tourists to drown in the canyon due to a flash flood many miles away.

Before opening the canyon for the day, a couple of safety checks happen.

1. Rainfall is checked for miles around. Antelope Canyon May have blue skies but if it’s raining in an area that impacts the canyon then tours are cancelled for the day. This has only happened about ten times in the last twelve months.

2. Snakes, scorpions, wolves and any other dangerous creatures are picked up and moved about 500 metres away.

The canyon had so many designs crafted by the current of the water. The reddish pink earth was called Navajo sediment. We visited in the late afternoon and saw varying colours on the walls depending on where the suns reached inside the canyon.

Everyone in the fanau loves it! They were not enthusiastic about visiting Antelope Canyon until they were walking through it realising how beautiful it is. 4yo found it a bit scary because he said he was in a long tunnel. 2yo screamed his head off for about fifteen minutes of the walk – which seems endless when you’re trapped in a confined space that echoes. Once he passed out then I relaxed back into enjoying the scenery.

As for the tour, we went with Dixie Ellis. I’d read reviews about being given history of the people and some info on local flora and fauna. I’d hoped I could offset the tour as part of geographical, historical and biological study but this tour lacked cultural depth or any sense of education. 14yo comment that the “tour guide” was just a safety instructor and then went on to say that it could’ve been because it was the last tour of the day. 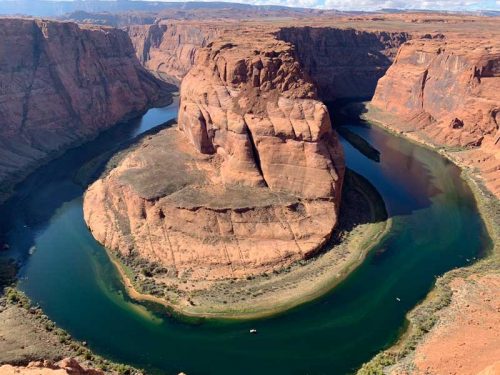